Whether your New Years resolution is to make more sustainable choices or work out more, Ohelo reusables are the easy way to hit your goals. Personalise your order with a laser engraved name!

How much plastic are you eating?

Microplastics are tiny fragments of plastic measuring less than 5mm in length. They are formed when large plastic items degrade and break down. Plastics can take hundreds of years to break down and even then, they leave behind these microplastics.

Microplastics are now found in even the most remote areas of the Earth, from the top of Mount Everest to the bottom of the ocean and in the Arctic ice sheet. It is well documented that sea life is ingesting large amounts of plastic, with research showing 1/3 of marine life in the English channel as having plastic present. Microplastics can even be found in the air that we breathe and in human blood.

Microplastics are in everything we eat and drink. According to a study published in Environmental Science and technology the highest concentrations of microplastics are found in drinking bottled water, followed by beer. The study looked at existing research on microplastics found in drinking water, air, beer, salt, seafood, sugar, alcohol and honey. Sadly, the air that we breathe has the 3rd highest microplastic concentration, meaning we need to look at that as well as the food we eat to estimate how much plastic we are actually eating. 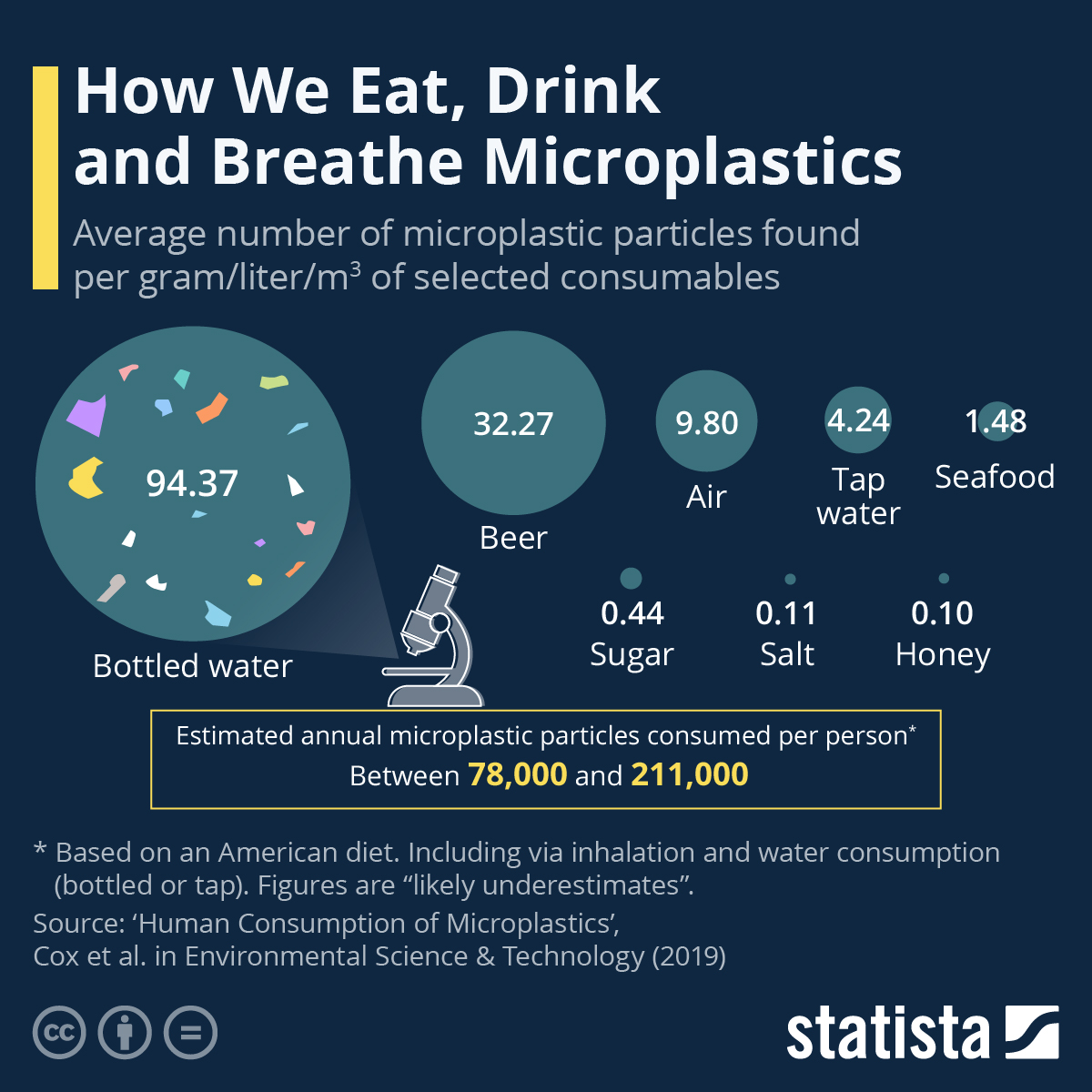 So how much plastic are we eating?

There are varying estimates of this actual figure, with most also acknowledging that they are most likely underestimates. One study commissioned by WWF and carried out by University of Newcastle, Australia has this estimate at around 5g a week, or 250g a year. That is like eating a credit card of plastic every single week. Or a dinner plate worth of plastic every year. That’s enough to make anyone stop and think.

Is this the full story?

So microplastics are always smaller than 5mm in size, yet we can break that grouping down further when we include nanoplastics, which are the particles that are smaller than 0.001mm (or 1µm) Currently most research studies have not included these smaller particles due to the difficulty in detecting them. This may mean we are actually eating far more plastic than the current studies suggest.

Microplastics are many different types of plastic materials (from PET that is used to make single use water bottles to Polycarbonate (PC) used in refillable plastic water bottles to LDPE used as a plastic film liner in single use coffee cups) with different forms of fragments (fragments, fibres etc) – some may be more harmful to us than others.

Scientists are still trying to study the effects of microplastics on our bodies to see at what levels they may start to have a negative impact on our health.

What can we do to reduce the microplastics we are eating?

It is difficult to impossible to avoid eating microplastics in the modern world. However, there may be ways to reduce how much plastic you are eating:

• Avoid plastic bags to carry food and drink in

• Do not heat food in plastic containers which can have significant plastic migration is used in microwaves. Instead, always use a glass or ceramic dish to heat food in.

• Drink loose leaf tea instead of tea in plastic teabags

• By choosing to reduce our use of single use plastic options we will also have an impact. Reducing our dependence and use of plastics will lead to less plastics being broken down into these microplastics, helping us to limit future levels of microplastics in our food, oceans and air.

News and insights from the Ohelo HQ Are you drinking enough water? Our 10 top tips for staying happy and hydrated How much plastic are you eating? The Best Sustainable gifts in 2022 What is a Circular Economy? Did you know that most insulated bottles still contain LEAD! The best reusable water bottle material – why we use stainless steel Green Product Award 2021 - a win for our small business! 7 MUST-HAVE sustainable travel essentials for your next trip How much plastic is really recycled? Have Yourself a Sustainable Christmas!

Ohelo is giving back. Click here to find out more about our charity links.